Special thanks to David Rowlands who sent me some interesting info and pics relating to venues “Phil Jones and the Unknown Blues” toured from Sydney to Brisbane in 1967. They travelled by train with all the band equipment with one member driving up. The boys were accommodated in a flat at Coorparoo.

The main venue they performed at was Cloudland playing with “Thursday’s Children” which a few of our readers remember. The two shows were on Saturday afternoon and evening. I love an afternoon show! They then played shows at Prinz Alfreds in Adelaide Street, The Red Orb then at Danceland at the Gold Coast.  The next gig was called The Boat-trip. It was on the MV Mirimar which later in it’s life would take people to Lone Pine until it’s retirement in 2009. They played for mainly teenage girls whilst the boat cruise along. The boat came and moored at an island in the bay (I’m thinking maybe Moreton?), all the passengers disembarked and walked across to an open air stage. The band played another rest then all rebounded and returned to the city. Sounds better than some of those other boat cruises. 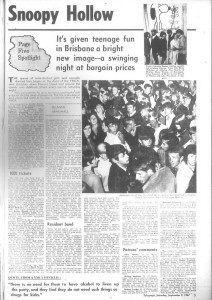 The next venue astounded me – I did not know this existed until David let me know. I knew of Snoopys club run by the YMCA but not of Snoopy Hollow. Snoopy Hollow was located in the top level of the City Council car park in Wickham Terrace. Who would have thought that we had a band venue there? Apparently the crowds were huge and the band were very welcomed. David reports that it was a great venue not only for it’s location but because the weather was so hot and humid it was a lot cooler on the roof.

They finished their tour with an “out of town gig” at The Bowl at the Ipswich Tenpin Bowl. What a great tour with amazing venues. Thanks for sending through David. 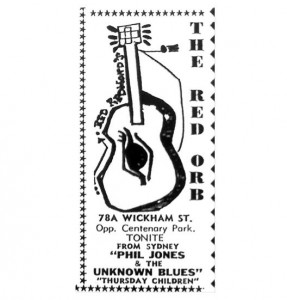 If you went to any of these shows or experienced any of these venues particularly Snoopy Hollow, let me know. 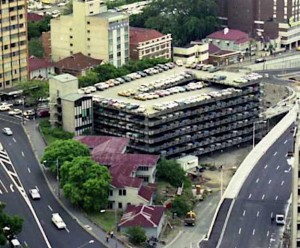 This entry was posted in Clubbed Out. Bookmark the permalink.

8 Responses to Touring in Brisbane