The Vinyl is coming out to play

If you were a clubber in the 80’s and the 90’s then this special night is just for you. GOYA DISCO was a weekly Sunday night event at the Greek Club which ran incredibly from 1975 to 1993. Recently, I had the pleasure of chatting to George Kassos who was one of the DJ’s at the club. He told me that when it first started it was the only Sunday night disco in Brisbane. Every week they would have to apply for a liquor permit and every week crowds would turn up for a great night out. Now, 21 years after GOYA DISCO said farewell it’s time to dust of the vinyls and head to the Greek Club to step back in time and get on the dance floor. Original vinyls and the original DJS from GOYA (80’s-90’s), Images, Sibyls,  Lexington Queen, Rumours, Images, Hot Gossip, Mary Street and Transformers. I love that vinyl will be played – beats the laptop if you ask me.

What a hoot this one is going to be!

So get along for this great step back in time. 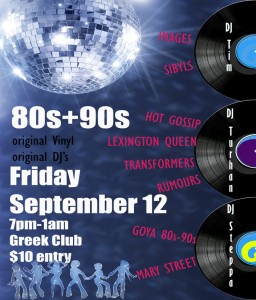