Recently I received some great cards and info from Noelene. I love discovering clubs and really appreciate everyone posting their stories on going out. If you are interested in being a part of this project, please do! Can you include years and addresses so I can pin point when the club existed and where it was. Without this I can’t add it to our club list. As for the club list, I have had such a great response I will be totally revising it soon. Promise. When you do list a club I do have to check via archives and library research which does take time. 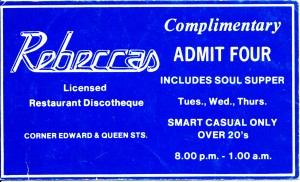 The laneway was the scene of much boy/girl action and drugs, but I just recall seeing marijuana and pills. The first night I was there was late in 1977 I think it was November and we called in after Rod Stewart’s concert at Festival Hall. I worked there at lunchtime as a waitress.  One of the part owners, Lez Zeilin was Polish and his Mother worked in the kitchen making traditional Polish food. Surprisingly for such a dive of a place that Polish food was made with love and care and tasted fantastic.  I still remember how different that place looked in the daytime, although being in the basement it wasn’t exactly bright. 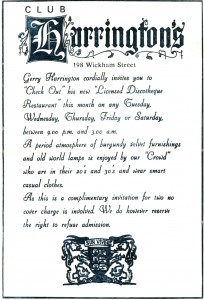 The second club was Harringtons. Owned by Gerry Harrington who also owned Rebeccas.  Harringtons was in the Valley opposite the now China Town street. Think it is Tony’s Nightclub now. Gerry had it all decked out in maroon velvet with lamps on tables and a small stage with a dance floor which was surrounded with mirrors. Same licence laws. The chef (for want of a better word) was called Cookie. The lasagne was very popular, can’t remember much else on the menu, most people stuck with the lasagne although watching Cookie make it was enough for me not to recommend it.The tomato base was made by a guy who owned/worked in ??? the restaurantacross the road on the corner of the side street. (ed- I think this was the Riveria) He used to deliver boxes of the sauce in XXXX longneck bottles. They were the main clubs I went to. After Harringtons came Whispers in the Valley. I was out of the scene by then. Oddly I don’t remember Rebeccas or Harringtons closing down.(ed- Can anyone assist?)

Charlie Browns wine bar was also popular, it was downstairs just around the corner of Albert Street in QUEEN Street. Think there is a phone shop or ANZ bank there now. Suspect that the downstairs part of JB Hi Fi formed part of it. Afrika in Elizabeth Street became popular, I think it may have preceded Rebeccas but I’m not sure, my first husband worked there and on the back of the entry card he has written me a note from when he lived at Annerley. Thats why I think it was early days. 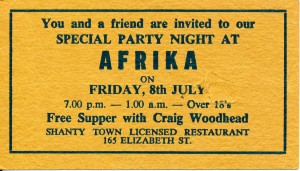 The guys (Gerry Harrington and Les Zeilin) had leased the site that became the Atcherley. Awful place, what were they thinking, I remember going there with them to see if it could become the next hot spot. They went ahead and I recall being there on the opening night but can’t recall ever going back. After Whispers in the Valley, much later, probably 1983/84 was The Brisbane Underground in Caxton Street. That place was my last experience of clubs.  Anyway, enjoy the cards…Boogie Wonderland just started playing in my head.

Thanks Noelene for your stories and your cards. If you have something you’d like to contribute, let me know.